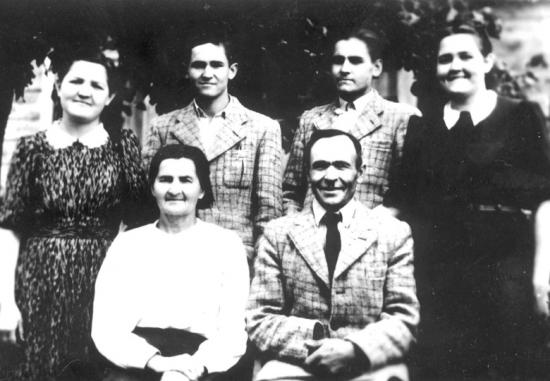 The Rescue of the Future Chief Justice

Zenonas Mozūraitis was barely 10 years old when the German army invaded the Soviet Union and occupied his homeland of Lithuania. He lived in the village of Lenkčiai, about 35 miles north of the city of Kaunas (Kovno), with his parents Jonas and Ona, and siblings: Mefodija, Alfonsas, and Zuzana.

In August 1944, Zenonas and his family suddenly became rescuers of Jews. An acquaintance of his parents, Jaroslavas Rakevičius, turned to them to enlist their help. The Rakevičius house had been searched by the authorities and a Jewish prayer book that was found on-site could have exposed the Rakevičiuses and the Jews whom they were hiding. The Rakevičius family sought out people they knew and could trust, thereby creating a rescue network.

The Rakevičius family engaged in mass rescue of Jews. In all, they harbored 20 Jews who had fled from the Kovno (Kaunas) ghetto. The German authorities established the ghetto in August 1941 for about 35,000 Jews. Between 1941 and the end of 1942, the German authorities organized several mass murder actions of Lithuanian Jews. They also killed approximately 5,000 German Jews whom they deported to Kaunas. Only a few thousand Jews remained alive. Those were Jewish workers and their immediate families. In fall 1943, the ghetto became designated as a labor camp. Further actions against Jews took place, including deportations to other camps. Already in spring 1943, some Jews escaped from the ghetto and others managed to find a way out in later months.

Among those who escaped from the ghetto in May 1944, were Lea and her eight-year-old son Aharon Brik (later Barak). The Rakevičius family hid them in their household in the village of Keidžiai, about 60 miles south from Kaunas. It was the Briks, and Meir and Henya Meltz, who needed new shelter after the search of the Rakevičius’ property. The Mozūraitises, who were simple farmers, agreed to take them into their home at great risk to their own family. They prepared two bunkers, one inside the house and another in the yard. The Jews hid inside their hiding places during potentially dangerous situations, such as visits by strangers and neighbors and during raids in the village. The Briks stayed with the Mozūraitis family for two months, until July 1944, when the Red Army liberated the village.

After liberation, the Briks returned to Kaunas where they were reunited with Aharon’s father, Zvi. In 1947 the family immigrated to Israel. Aharon Barak became a professor of law, served as Israel’s Attorney General (1975-1978), was appointed Justice of the Supreme Court in 1978, and was Israeli Chief Justice from 1995 until his retirement in 2006.

Zenonas Mozūraitis and his family agreed to help people whom they did not know. They did so while risking their lives. Both adults and children, such as Zenonas, participated in these efforts. Helping Jews was not the common choice in Lithuania. By 1944, when the Briks and Meltzes arrived in the Mozūraitis’ home, nearly all Jews in Lithuania had been murdered by the Germans and their Lithuanian auxiliaries. The majority of Lithuanian Jews were killed in or near their homes in mass shooting actions. It was thanks to the few non-Jews, such as the Mozūraitis and Rakevičius families, who forged rescue networks and exhibited great humanity in extreme situations, that some Lithuanian Jews survived the Holocaust.

On July 15, 1976, Yad Vashem recognized Jaroslavas Rakevičius as Righteous Among the Nations.

Read more about the Mozūraitis family on Yad Vashem’s website.

#DontBeABystander is a joint project of the Claims Conference with our partner organizations.